That pretty much is my question. How to make chicken pot pie without dairy?
I guess I should also right away ask for Good recipe to make chicken pot pie. I have frozen pie crust which is good. But have no idea what to do about the pie itself. Never made one, never had one. To be honest with you doesn't sound attractive to me at all. But must make one for my wife. Been promising for a while.
Please help.
Last edited: Nov 3, 2022

Charlie you can use chicken stock and olive oil in place of the milk and butter typically used to make the sauce for the filling.

Charlie, I'm not an expert but you don't need any diary products to make a chicken pot pie. For starters you could use a rotisserie chicken. Carrots, peas, if you want potato (not every one puts potato in though).

A good roue of a fat and flour, your chicken stock/broth and you have your gravy sauce. Throw in your other ingredients, top with a crust and bake!

I was just going to give you Andy's link but he posted before me. LOL it is really good! Can't miss with that one!

Andy M. said:
Charlie you can use chicken stock and olive oil in place of the milk and butter typically used to make the sauce for the filling.

Andy, does it make a difference if I use pie crust, not ramekin?

No difference, Charlie. I use a ramekin and a top pie crust.

A roux-based sauce made with broth rather than milk is called Veloute. That’s what’s used in chicken pot pie. Make sure your sauce is well seasoned and tastes delicious, as it’s a big part of the chicken pot pie experience.

Have you ever tried rice or soy milk? Both work well in other applications.

should I defrost the pie crust I have or not?

I would just make a single crust with crisco or other vegetable shortening. You can use a food processor to make the dough or the old fashioned way. 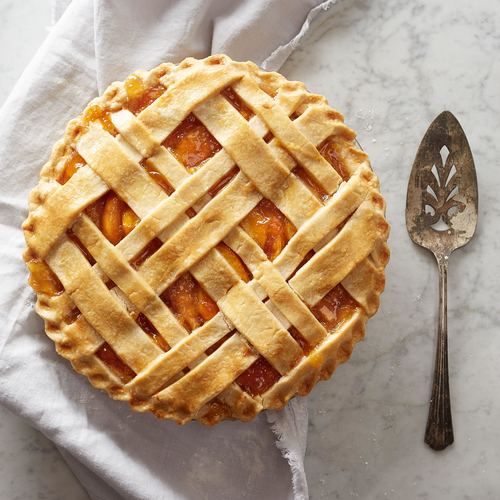 Crisco presents the Classic Crisco Pie Crust recipe that all America loves! Get detailed instructions and nutrition information on our recipe page here.

You can freeze the crisco or even just refrigerate it to get a flakier crust.

To make in food processor, basically follow directions for by hand way. Pulse salt and flour to mix evenly. Break up the crisco and scatter on top of flour. Pulse until crisco is cut into the flour, then turn on and add water until dough forms a ball. Remove from FP and proceed from there.

I would use vegetable broth as above. If you have some schmaltz, use that for your roux. I usually chop up some onions, sautee them in the fat, then add the flour to make the roux.

For veges, I use what we have on hand, carrots, peas, green beans, potatoes, etc.
C

Pie crust does not freeze solid. Do you want your filling to be thick? In the fall, I like a loose pie filling, steamy, and chunky.

A roux-based sauce made with broth rather than milk is called Veloute. That’s what’s used in chicken pot pie. Make sure your sauce is well seasoned and tastes delicious, as it’s a big part of the chicken pot pie experience.
Click to expand...

Thats what I do when I make a 'Vegan' deconstructed Chicken pot pie.

I sautee up Chopped onions, string beans, carrots, broccoli . Add some veggie broth ( fake chicken flavored broth), Toss in some frozen peas, corn and pre cooked cubed potatoes. Some sage and thyme. Thicken it with a light roux. Then pour it over a breaded chicken cutlet ( vegan). Just dug up some pics, loos like I tossed in mushrooms too.

Not the real thing, but quick, easy and tastes good.
When Im in a carb cheating mood, Ill make biscuits , slice in 1/2 and put 1/2 on top to ac as a crust.

One pic is of the sauce itself ( thickened with a light roux, no dairy)
The other pic is the sauce with pieces of ' chicken' mixed in and a biscuit on top.

About as far from a conventional chicken pot pie could be, but when you have a vegan wife ( and being a vegetarian), you are forced to be creative.

***Great to see you back in action Charlie, I was getting concerned***

cookiecrafter said:
Pie crust does not freeze solid. Do you want your filling to be thick? In the fall, I like a loose pie filling, steamy, and chunky.
Click to expand...

If he has the folded up pie dough, it has to be defrosted to unfold and roll out a little. If I remember correctly, the preferred way is to defrost in refrigerator overnight. It's been a long time since I bought one of those so memory could be faulty about defrosting time/technique.

If it's a crust in an aluminum pie pan already rolled out and ready to fill, it won't take long to defrost.

Using biscuits is also a good way to go, but they do absorb some of the gravy (which is great taste wise) so you need to make the filling with a bit more gravy.

Oh I didn't think about it earlier, but I always par-steam the veges some to be sure they cook all the way.
You must log in or register to reply here.