This is a Chef John recipe that I got back in 2016. If the video was around then I didn't see it. I recommend you watch.

Directions:
1. Preheat oven to 400 F, 200 C, mark 6.
2. Wrap each section leek with a piece of pancetta.
3. Brush olive oil into baking dish, bottom and some side. Sprinkle dish with your S & P and cayenne. Carefully place leeks with the cut side down, into your baking dish. Pour chicken broth and white wine over.
4. Cover dish tightly with foil and place on baking dish... (just because).
5. Bake in oven approx. 45 minutes, until just tender. Uncover, pour cream over the top, sprinkle on your Parm-Reggi and return to oven for about 15/20 minutes more. Until cheese is golden and sauce is bubbling.
6. Cool about 10 minutes. You can either serve directly from dish (re-spoon some sauce over) or transfer to a serving dish and pour sauce over. Garnish with chives.

If you are serving whole sides, be sure to supply steak knives. Although tender to eat, they are still fibrous enough to need a sharp knife. This is one of the reason I cut mine down, making it easier for guests. Cut in thirds, as I have, is still a big mouth full, but cut in 1/4's was too fussy and both ham and leek kept falling apart as I tried to wrap.
Note:
I cut my leeks into thirds from what he shows as a full length (well, to the dish that is). He also seems to have removed the edge of fat that is on the pancetta, I don't. In my recipe last night I was only using 2 leeks. I still did the same amount of sauce, I like extra sauce. 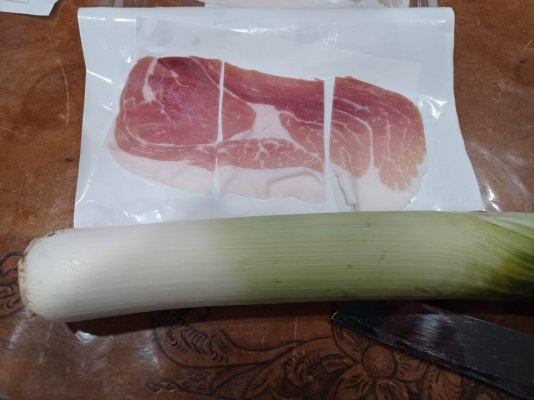 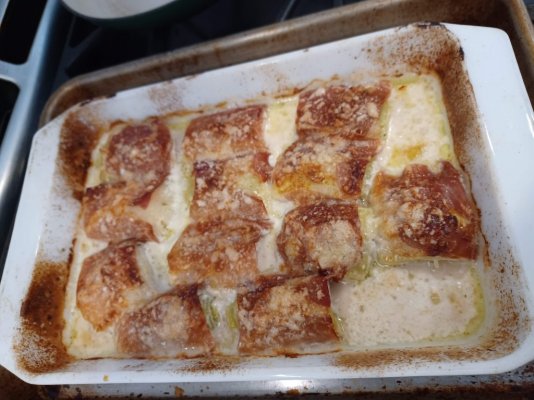 taxy, I've rarely found leeks much dirtier than what Chef John shows in his video. The dirt is mostly at the top. It seems to stop just as it gets to the white part. Easy to rinse out. If you are using the green tops (good for flavouring stocks, light green can be sliced, dehydrated, fantastic in soup) there might be a bit more dirt but chopped them up, (I use a salad spinner) fill bowl with water, swish leeks around, let the water settle a bit, lift out the greens, dump and rinse bowl, spin greens. It's rare I ever still see dirt in the bowl, but another quick rinse takes care of it. Really not a big ta-doo!

In his video he shows serving, in a bowl, with bread, not as a side but as a lunch... I just might try that!
D

slice the leek in half longways - result=half-moon.
easier to wrap, the pancetta size works as a wrap vs. a blanket
400'F is much too hot - which is why the outside is done and the inside is still tough.
I do mine at 325'F, check with probe/toothpick for soft, then jack up the temp to brown/crisp the pancetta & cheese

Thanks dragn. Isn't that prosciutto in your picture, not pancetta? Do you think there is any reason not to use bacon?

Thanks for typing up the instructions.

The reason I asked about washing the leeks was because I thought it was pieces that had not been cut in half the long way. Once they are cut in half, I know how to wash them. I've done it quite a few times.
Last edited: Oct 11, 2022

I found the video.

You posted that while I was watching the video and copying the recipe.

But to me Pancetta is round discs or cubes. So, in the store, I just looked at the pkg, saw flat pieces to be able to wrap and grabbed them.
Now that I've seen his video - I would still have made the same assumption. Those pieces are not round, but strung out like bacon. Anyhow - your choice - that's what so great about cooking! make the reicpe your own, LOL!!

dcSaute, yes, they are half moons. I did say slice length wise, but true, I neglected to say I subsequently cut them in thirds. Please don't remove any pleats in my toque blanche!
I will try the lower heat next time, maybe not all the way down to 325, but... won't that take a lot longer?
Think it will also depend on what else I'm cooking, temp and time to be considered. Unfortunately I do not have double ovens.

Dragn, I think that Chef John unrolled the pieces of pancetta.
D

...they are half moons....
okay. it wasn't clear (to me - I can be dense...) from the text or pix.
cutting them in (length) thirds does not do a lot for the cooking aspect - but does address the 'fork size' issue you raised.

lower temps ... yes - extends the cook/bake time. but 'hot&fast&tough' is imho is nothing to strive for.

I put that leeks sheetz on everything - to steal some adverts....
when leeks are "properly" cooked thru there should be minimal fiber/toughness left.
I do braised leek where - with the exception of the outermost layer(s) = too frugal a cook....
are basically fork tender / choppable.
most of my other "luv-me-a-leek" recipes/dishes involve sliced leek - hence the toughness issue is negated.

But to me Pancetta is round discs or cubes. So, in the store, I just looked at the pkg, saw flat pieces to be able to wrap and grabbed them.
Now that I've seen his video - I would still have made the same assumption. Those pieces are not round, but strung out like bacon. Anyhow - your choice - that's what so great about cooking! make the reicpe your own, LOL!! . . .
Click to expand...

Yeah, pancetta is rolled up pork belly. So If you unroll it, it looks like bacon. You can have the meat department/butcher thin slice it for you.
Last edited: Oct 11, 2022

@dcSaute, I have two questions for you. How long does it take to cook the leek until tender at 325°F? And, is there a way to test if they are tender, while they are still in the pan?
D

how to test? bit like cakes - push in a toothpick (my fav is my (drop forged) carving fork tine)
when the probe pushes through the half moon thickness with minimal resistance' yer good to go...
D

how to test? bit like cakes - push in a toothpick (my fav is my (drop forged) carving fork tine)
when the probe pushes through the half moon thickness with minimal resistance' yer good to go...
Click to expand...

Thank you, dcSaute. I have added this info to my notes on the recipe.

And are you also saying that they are fork tender? Mine were kitchen fork tender but still have that tough outer shell. Between the bacon and the outer layer, still needs a steak or extremely sharp knife to cut. Even tonight as a re-heat, still fibrous. I don't think leeks can ever be fork tender. LOL

Andy, he (Chef J) probably did unroll it. He is usually so good at explaining what he does, just seems funny that he didn't, in either the video or the posted recipe.
D

you may want to remove an outer leaf or two - the interior leaves are more tender / less fibrous.

if you're slicing/dicing them, it's rarely noticeable, but as a 'whole/half stalk' it would be.
I bake a similar dish and then get tender to the point a toothpick goes right through with little resistance. I don't use (as much) liquid - so that could speed up the cooking time.

Of course, you don't have to use pancetta. BACON is a perfect replacement.

Andy M. said:
Of course, you don't have to use pancetta. BACON is a perfect replacement.
Click to expand...

Oh my dear boy! How perfectly gauche of you. Common bacon? Nevah!

How dare you blaspheme BACON! A pox upon you!
You must log in or register to reply here.