What are you doing?

That sounds exciting Munky. Have a happy and safe move. I hope you get enough help that you don't get too exhausted.

Had to go shopping, also hit the 'puter store and had them help me do a bunch of things on this %^&*() new computer. Then Wally's World, chips; No Frills, dog chewies; Canadian Tire, dog collar batteries; Sobey's, strawberries; Wine Shoppe, Pinto Grigio light, from Ontario.

About to plonk myself down and watch my latest series... Lie To Me. Love it.

and that's it til bedtime! Ciao!

dragnlaw said:
About to plonk myself down and watch my latest series... Lie To Me. Love it.

and that's it til bedtime! Ciao!
Click to expand...

I miss that show!!

I'm trying out a newish grocery delivery service which is part of a supermarket chain that I used to order from. It's called Voilà. They have sent me a list of what I get, what I don't get, and what they are substituting. There's only one substitution, which I think is acceptable. Now, I'm waiting for them to call me and let me know that they are on their way. I can tell them that I don't want the substitution at that point, but I won't in this case.

what did you order?

SEEING-TO-BELIEVE said:
what did you order?
Click to expand...

Regular groceries. I get most meat and produce elsewhere.

The substitution was for some cheese. I ordered the store brand of old white cheddar cheese. They substitution was for a name brand cheddar, but mild and "marbled", which means both an orange colour and a pale yellow, in a marbled pattern. We'll see what we think of that new-to-us cheese. But, I really do prefer old (strong) cheddar to mild cheddar.

I'm with you, Taxy -- Sharp or Extra sharp cheddar, for me!

Think you'll find that the marbled is just mild cheddar, with half coloured and the other half regular.

dragnlaw said:
Think you'll find that the marbled is just mild cheddar, with half coloured and the other half regular.
Click to expand...

Well, yeah. I just don't see the point and would never buy this if I had other choices. Stirling eats a lot of cheddar and he would rather have this than not get any cheddar. Not to worry, we have two and a half packages of store brand, old cheddar in the fridge. This one was on sale, and I like to have backups.

For those of you that don't know, orange cheese is that colour due to food colouring added. Long ago, where the originial cheddar came from (Cheddar, England, ) there was an obvious tint of orange to it due to the foods the cows ate. It became traditional that 'cheddar' was orange coloured.

As to the marbled cheese - a marketing ploy. I buy it, especially for mac 'n cheese to go along with the stronger ones.

I don't usually want food colouring in any of my food. But, the orange colour added to cheddar is annatto, made from the seeds of the achiote tree, so I don't mind, much.

taxlady said:
Regular groceries. I get most meat and produce elsewhere.

The substitution was for some cheese. I ordered the store brand of old white cheddar cheese. They substitution was for a name brand cheddar, but mild and "marbled", which means both an orange colour and a pale yellow, in a marbled pattern. We'll see what we think of that new-to-us cheese. But, I really do prefer old (strong) cheddar to mild cheddar.
Click to expand...

GinnyPNW said:
I'm with you, Taxy -- Sharp or Extra sharp cheddar, for me!
Click to expand...

This is the one I love. And it's white. 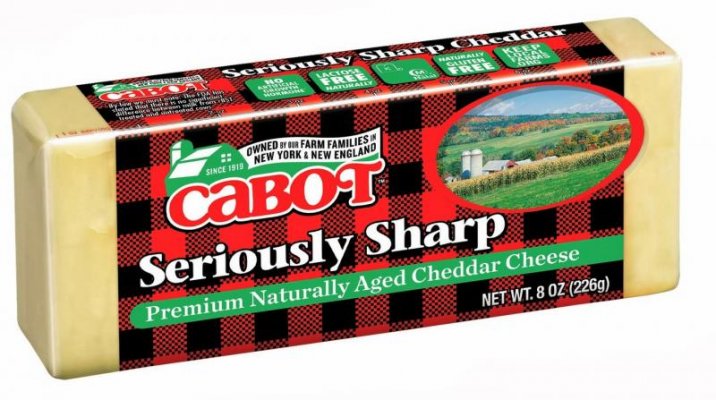 my SIL and ex absolutely LOVE Cabot cheese. They bring it home with every trip to the US when they happen to go. Me, meh... it is certainly good but I would not go out of my way for it.

We're waiting for the Pest Control guy. Need help with some wasps that just don't seem to want to go away! Don't want a repeat of what happened a few years back when Stanley got too close to their claimed spot!

Ugh, Ginny. We had to call in a service last summer because there were paper wasps who had built a small village under our front porch steps. By the time I had called, they had all but abandoned their nest. I still had the tech make sure the last of the stragglers were dead. Keep those pooches safe!

We had a nest of yellow jackets nesting in the wall behind the bathroom window frame. Called for pest control and once he found the location, he took care of it. I really didn't want to be chasing flying stinging bugs while I was showering!

The previous problem was out back and it was a ground nest. It was under the fence, half on our side and half on the neighbors side. Stanley "found" it. Mikey was out back with him, I was in the shower. Mikey said he took off running for the house and he knew something was wrong. They were all up in his fur and they don't just sting once, they keep biting and biting. When I got out of the shower, there was quite the panic going on, trying to find the bugs on Stan, pull them and kill them.

The current problem is kind of hard to miss. They are by and around the front door. The company that took care of the previous problem was great, but they have been purchased by a new company...and, let's just say, we opted to find a new company. Here's hoping this one is a good as the old one!!

Oh poor Stanley!
I'd bet that he doesn't go too close to that fence any more, eh Ginny?

No, he avoids it...but Cadie still runs thru the bushes along the fence. It was BC...Before Cadie.
You must log in or register to reply here.

M
What to do with extras?

Oct 31, 2022
Marlingardener
M
K
Why do some people add wine when cooking? What is the logic behind?
2