Soup Season, anyone got any upcoming soup plans?

For me soup season is every day of the year, but now with the cool weather settling upon us, It seems fitting to incorporate soups into our weekly menu. The few I have on the short list are:

- Mushroom Barley : With the amount of mushrooms I've harvested and dried, I've been waiting all season to make use of then with this soup. I'll often thicken it with a medium dark roux, which adds a great finished flavor to it.

- Butternut Squash Soup : For similar reasons, I have a decent amount of Squashes I need to use up. Years ago I found a recipe that I loved, and sure enough I misplaced it. I found another that was pretty good. Usually add a green apple to it, which makes a huge difference.

- Pea Soup: I use split peas soup almost as my Produce drawer ' dump soup'. I use the obvious split peas, but in addition, I'll toss sin carrots, celery, onions , garlic, a potato any thing else that may be sub par for anything else . I also love this soup cause it freezes well.

- Onion Soup : I was hoping to use the onions from the garden for this soup, but due to the amount of onions needed , and the much smaller size of my onions, it will just be easier to use store bought, and use my onions for other purposes. I will throw a few in, just to keep it home grown/ home made.. I like adding a good cup or two of caramelized onions to the soup in its final stages of cooking. I always have caramelized onions in the freezer. I make them bulk in the slow cooker. ( For years my son bought me a 25 pound bag (I think one year a 40 pound bag) of onions for fathers day, so had to make use of them before they rotted )

- Potato soup : This is a recipe I kinda adapted from Ratners Restaurant in NYC back in the day. They also used to sell their soups in the frozen section too. My wife being vergan, I have to eliminate the cream (which makes a huge difference), but the soup still comes out pretty good. Adding fresh dill at the gives it a nice fresh touch.

- Grandma Rosie's Vegetable Soup : My grandmother was not a great cook. Partially cause she had diabetes and stomach ulcers, so was limited in what she could eat. Partially cause she grew up in the depression, and was limited in what she had available, and partially cause she just wasnt a great cook. But, she did pass down this recipe for her vegetable soup which was simple but tasted good. I make it for the family ( especially for my mom ( it was her mother) at least once a year when we all get together). What makes this soup kinda cool to make, is that she always made it in a specific pot, so all the measurements are based off that one pot's dimensions. Sure, I can convert and adapt, but its much more fun to make it in the same pot that she made it in ( which I inherited).

- Corn Chowder : Actually made this the other day. My wife loves it. Again, have to be creative due to the vegan thing, and doesn't come close to when its made with cream in it, but still good.

- Charlie D's Hot Borscht : My dad always made a cold borscht, but a few years back Charlie D posted a recipe for his hot borscht which I made and loved. Had to vegetarianize it, but still came out great. What got me on this one was the inclusion of a tomato product in the soup ( I used tomato paste). It sound odd to me, but makes aa huge difference in the taste. The soup wouldn't be the same without it.

There are so many more, but these are the ones that will make it to the table over the next few weeks .

Most of the above recipes are not really written down, more like I have a general idea of what I do, combined with whats in the house and available.

I DO love soup!

Soup! I love it. Made Turkish Lentil soup yesterday. So easy, so frugal.
I have ham & pork shoulder stock in the fridge, ready for Tuscan Bean or any bean soup. Never been a fan of pea soup, though my family's from Quebec.

On my list for November/early December:
Mushroom Barley
Butternut Squash
Celeriac (Celeriac is not the prettiest veg, but my oh my, it is lovely as a soup).
Tom Yum
Hot & Sour
French onion, when I find a big bag of decent onions. Not been the best onion season around here.
and maybe some Tonkotsu Ramen, now that I've figured out how the induction range handles the pressure cooker.

There used to be a great Turkish restaurant near me which made the best Turkish lentil soup. It has since closed and I haven't had anything as good since.

There's a restaurant in Newport RI which made such a good lentil soup, that I ordered a second bowl for dessert. Unfortunately, it was a special, and not a regular on the menu. Haven't had it since.
S

Tomatoes! Of course! The local greenhouses are dumping excess tomatoes right now. Not normally a fan of greenhouse tomatoes, but if they're cheap & roasted first, they're pretty good in a soup.

I think I'm up to 21 butternuts (and most for more than one dish), with those last 7 I harvested, so those will be in the soup plans. I am always using those dried eggplants, that I have a huge amount of. I make a lot of bean and lentil soups, using a lot of Indian dals in other types of foods, to make quicker dishes.
S

In a large saucepan over medium, melt the butter. Once it foams, add cumin. After the cumin toasts, add the onions & garlic, then sautÈ until softened and translucent. Add the tomato paste, paprika and cumin, then sautÈ for 1 minute.

Add the lentils, rice, water and 2 teaspoons salt, then bring to a boil. Adjust heat to maintain a lively simmer, cover and cook until the lentils and rice are tender and broken down, about 30 minutes. Taste and adjust salt.
You could drizzle each bowl with warm olive oil infused with Aleppo pepper, it looks nice and adds to the flavour & presentation. Herbs would be nice, too. 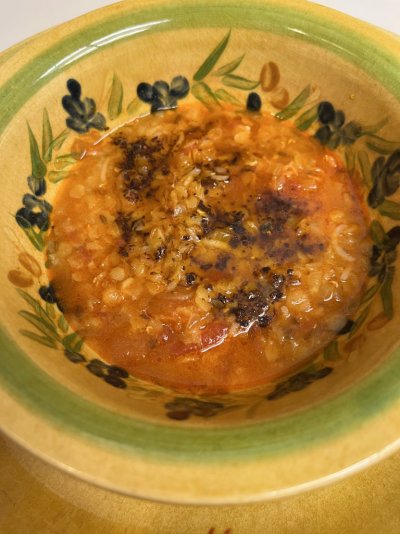 Like you @larry_stewart I eat Soup all year round. I already have a few Fall-ish Soups in the deep freeze: Butternut, Chicken & Wild Rice, Chef John's Beef Barley Stew (it's really a Soup), Split Pea with Ham, and that ever present Jook or Congee-I use Turkey but it can be made Vegan too.
I'd like to make my Loaded Baked Potato Soup, that can't be frozen.
Also Portuguese Bean Soup, pretty much a vegetable Soup with Ham Hock broth and meat + Portuguese Sausage or Linguica, MMM!

My soup plans for the near future include leek & potato soup, roasted root vegi bisque, and Tuscan Onion Soup (Carabaccia), which I haven't tried yet, but a friend recommended it. Sometime this season, there will be a large pot of Charlie D's Solyanka.

My main interest these days are simple soup hacks that can be made quickly in small quantities with a few inexpensive items.

Tonights dinner is cauliflower / leek soup with a BIG cheat. I'm using knorr leek soup mix as a base, then adding blanched cauliflower, pureeing and then adding chop parsley and some sautéed cauliflower florets. Quick meal and designed to use a bunch of end of the season garden offerings.

Like others, soup is a favorite around here too...

Then there are the "Cream of" soups, Carrot, Tomato, anything in the produce drawer...

Then there are the others Clam Chowder, Shrimp Bisque, Albondigas...

And then we get into the Asian influences, Asian Chicken Noodle, Tom Yum, Chaing Mai...

And then there are the stews, veggie, chicken, beef...Vermont Chicken Stew!!

Like K-Girl, I could eat soup all year long. Recently I have made potato soup, French Onion Soup, and beef stew (which had a soupy broth.) I would love to make some lentil soup or a delicious butternut -- sadly, I would be the only one eating that last one.

I had a really good carrot / cardamom soup I picked up in a Delaware Health Food Store. I took aa pic of the ingredients and will look for aa recipe that is similar.

Hey @Kathleen nice to "see" ya! For recipes that no one else likes but me, I simply make smaller batches and freeze them in zip-top bags, freeze them flat and stow away in the deep freeze. Soup/Stew in a zip-top can be de-frosted pretty quickly in a pot of hot tap water. All of the soups in the freezer right now are all mine!
And @larry_stewart Carrot and Cardamom sounds heavenly, I'll look that one up.
Last edited: Oct 24, 2022

My Butternut Squash is divine! 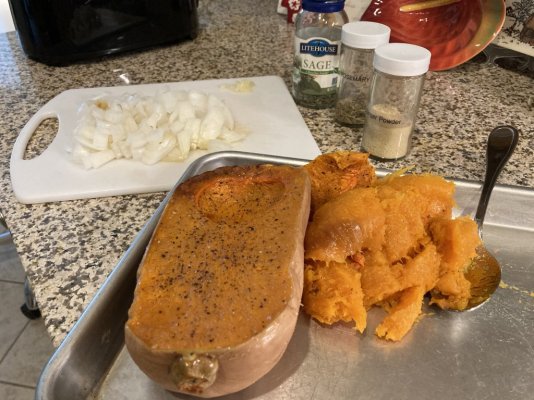 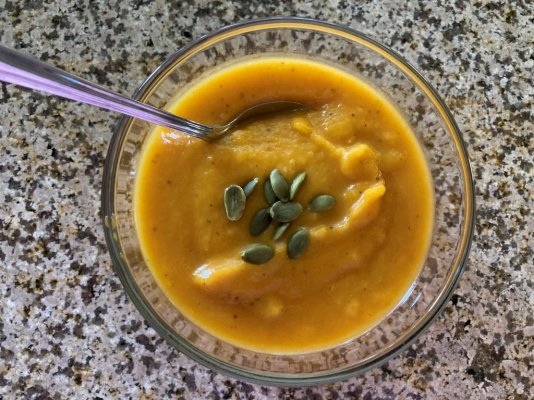 I made it on the thick-ish side using my stick blender, the roasted Onion is still a bit chunky, love it with the roasted Pepitas on top too! This is the first time I tried ground Ginger Powder in it, NICE!

Kaneohegirlinaz said:
Carrot and Cardamom sounds heavenly, I'll look that one up.
Click to expand... 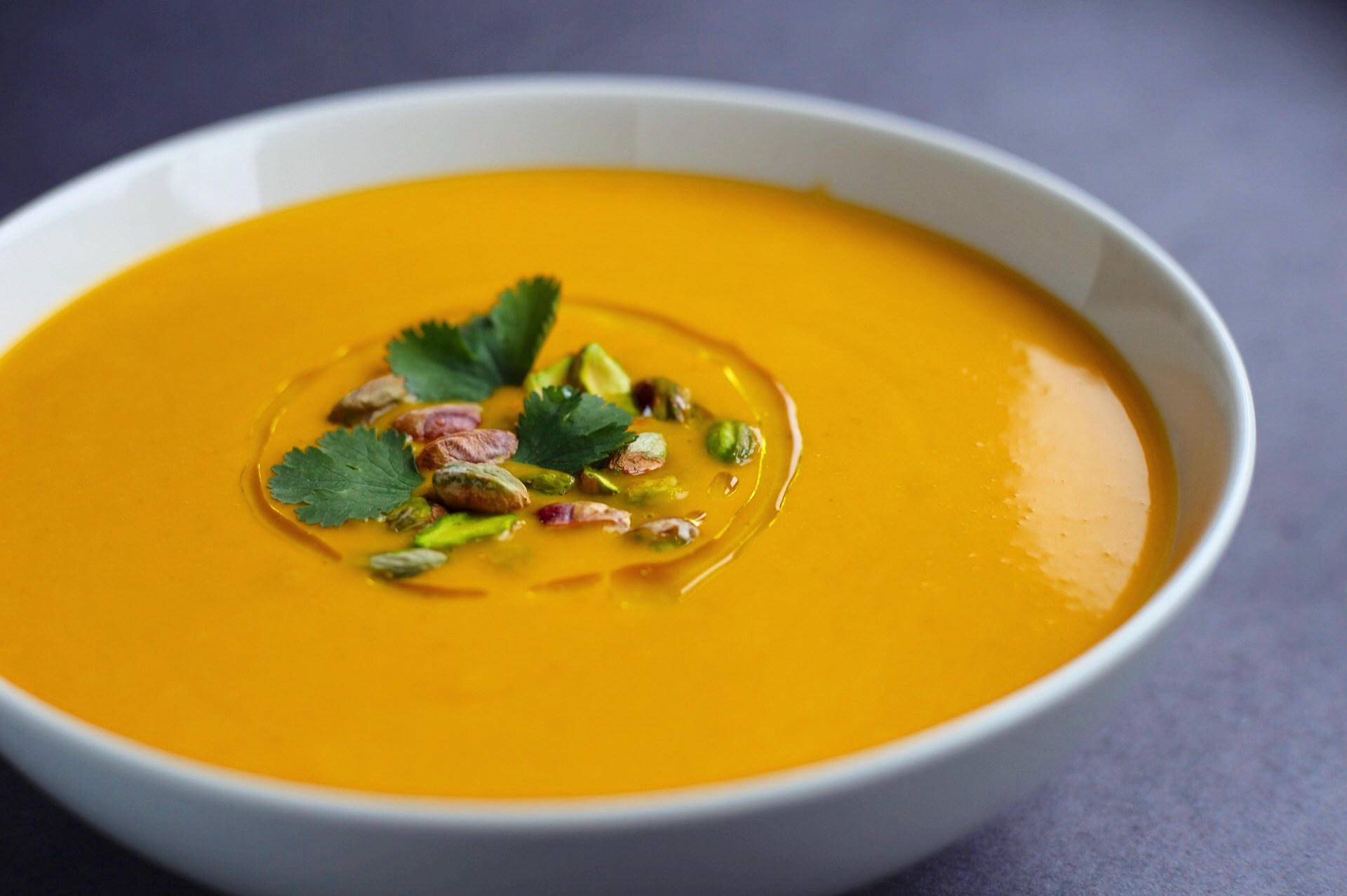 Update: Hands down, this was the most popular recipe from my previous site, Mel’s Food Blog. I’ve re-tested and re-shot it and made a few changes to the recipe, mostly improving the instructions for clarity. I’ve also upped the carrot...Read More

melaniesteelerd.com
I was just looking at my Spice Racks and I need to do something with those Cardamom Pods, there ya go!

Hmmm, hang on, maybe this recipe, but use vegetable broth for a g=vegan version ... 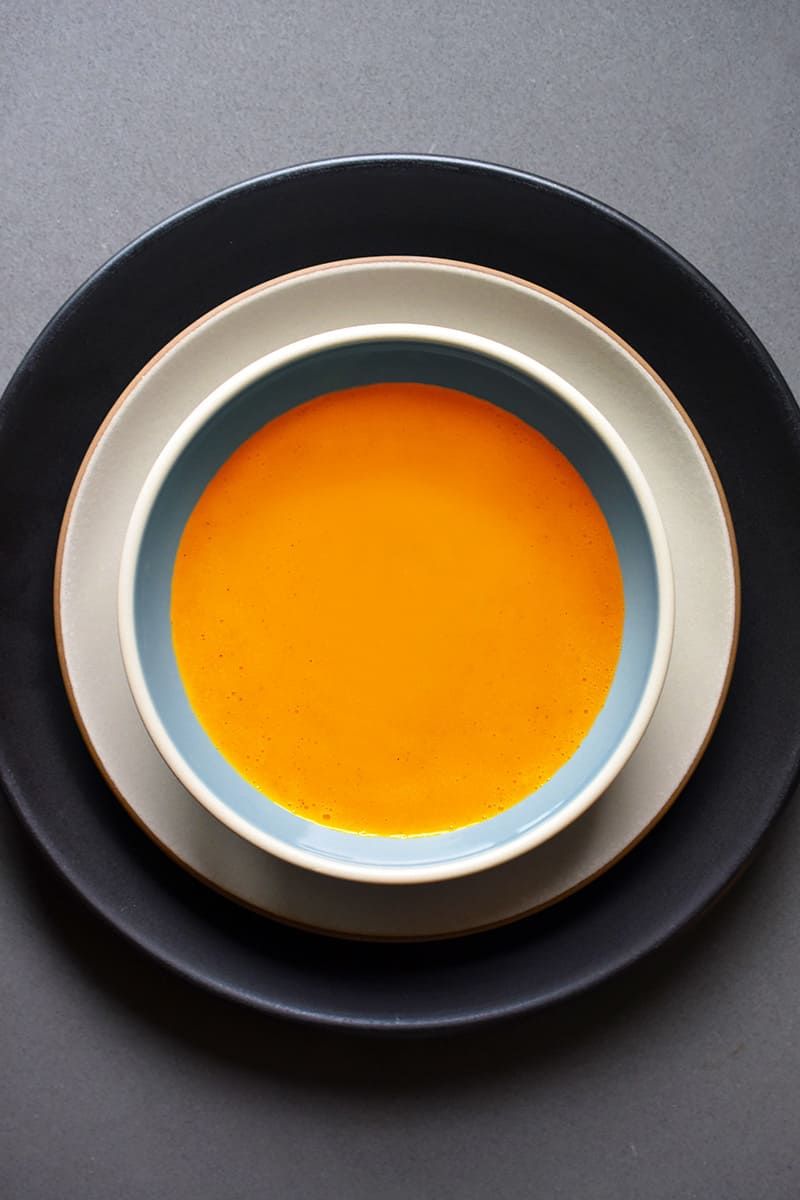 My Whole30-friendly Carrot Cardamom soup (Instant Pot or stovetop) is a quick and tasty bowl of joy made with carrots, ginger, cardamom, and coconut milk!

nomnompaleo.com
You must log in or register to reply here.