Non-stick maintenance - soot in the center

(hi, new here, and I know there's another live topic comparing NS, iron etc but for future travelers searching, I think a separate post is warranted)

TL;DR: it seems that nonstick pans have maybe 300 hours of use in them before they soot up no matter what, would like advice on improving cleaning or should I just accept this as reality?

So, I've done everything right, I think:
- Didn't cheap out on brand, although ok not le creuset or extrafancy brands yet..

- circulon total - never really understood the circle pattern,gimmick? But they worked ok for a while, good warranty​
- Eaziglide neverstick 3 - love the helper handle, why isn't this default on large pans.​
- Never ever used any metal, always only wood and some silicone utentils
- Always only cleaned with dishwasher liquid and standard plastic brushes (no metal scourers, didn't use dishwasher etc)

Yet, this is the eaziglide after 1 year of daily use as my main frypan cooking just for a small family. 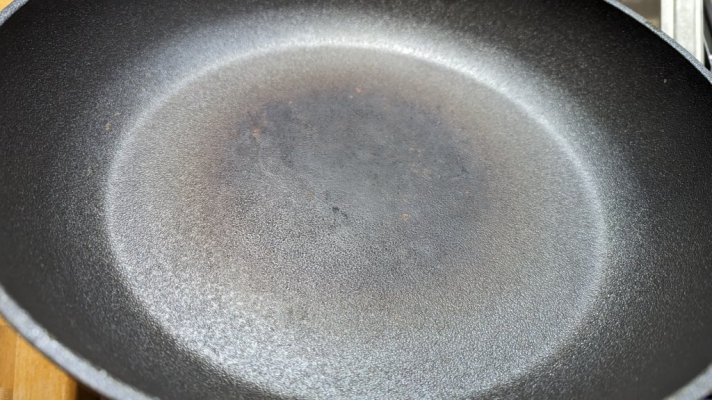 I somewhat suspect that the actual nonstick layer of my pans is fine underneath a layer of soot - I really didn't mistreat them, never dishwashed them etc
So perhaps the question is what I can do to remove the soot? I usually wash them the same day, no obvious laziness but I don't scrub beyond removing all visible food remains. Is there some thing I should do every week?

Tried some a few online deep clean suggestions recently (baking soda, lemon juice, vinegar) but no obvious improvement in look or function. Maybe I was impatient (left it for 30 mins each etc)
Wrote off one pan and even went to town with a metal scourer, and even that didn't help! Maybe I should patent my new diamond-level stick layer.

I'm tempted to think that this is just 'nature' and every decent anti-stick pan still just has a certain amount of uses (300-400 45min frying sessions) so ignore the ultrafancy brands and just get a $50 pan and ditch it every year? Feels wasteful.

I think they got too hot. I do the things you don't do (put them in the dishwasher, don't was them right away) and don't have this problem. I think you let them get too hot and this is the result.

Andy M. said:
I think they got too hot. I do the things you don't do (put them in the dishwasher, don't was them right away) and don't have this problem. I think you let them get too hot and this is the result.
Click to expand...

Interesting. (and I'm not dead from the fumes!)

I have a rule I usually follow which is that I only set my hob 6 out of 10 and it's only a 1500W burner. How can I tell if that's too much? Should I try to measure the temperature of the pan somehow?

Of course when there's liquid in there to be boiled(away) I might set it to max to get the water boiling, and sure I've forgotten a pan for short stretches while on max, but that's certainly rare.

This won't happen if there's food/liquid in the pan. It happens when the an is dry and too hot. Perhaps you pre-heat the pan too long.

Andy M. said:
This won't happen if there's food/liquid in the pan. It happens when the an is dry and too hot. Perhaps you pre-heat the pan too long.
Click to expand...

Yup I know, as long as there's liquid it will just boil at 100C . For this reason I don't think I thermally mistreat the pan, a few small, short accidents notwithstanding.

Is there some magic cleaning treatment ("every week"?) that I can do to wipe away the week's tiny film of building up particles that only after a year start really showing/interfering with things? (so obv. beyond normal daily dishwashing)

I wouldn't use anything harsher than a scrubber sponge that's safe for non-stick. It may or may not be removable. Logically, it's either burned on food or burned non-stick residue.

Andy M. said:
I wouldn't use anything harsher than a scrubber sponge that's safe for non-stick. It may or may not be removable. Logically, it's either burned on food or burned non-stick residue.
Click to expand...

Thanks Andy, certainly not going to use anything stronger (more metally) than a safe scrubber sponge, I was just wondering if perhaps I dunno, soaking it in vinegar every week might help with the residue that I can't seem to shake.

Couldn't hurt. I don't think you need to do it weekly. Either it works or doesn't.

Does the residue effect cooking? Is it not non-stick?

Correct, the nonstick effect is gone in the center. I'm pretty positive it's just 'carbonised' ex-food. But normal washing/scrubbing doesn't work. As anyone (?) I just .. brush pans until anything visible is gone, but this insidious layer very slowly builds up.

And it makes sense I guess, this is carbon molecules in high heat etc. 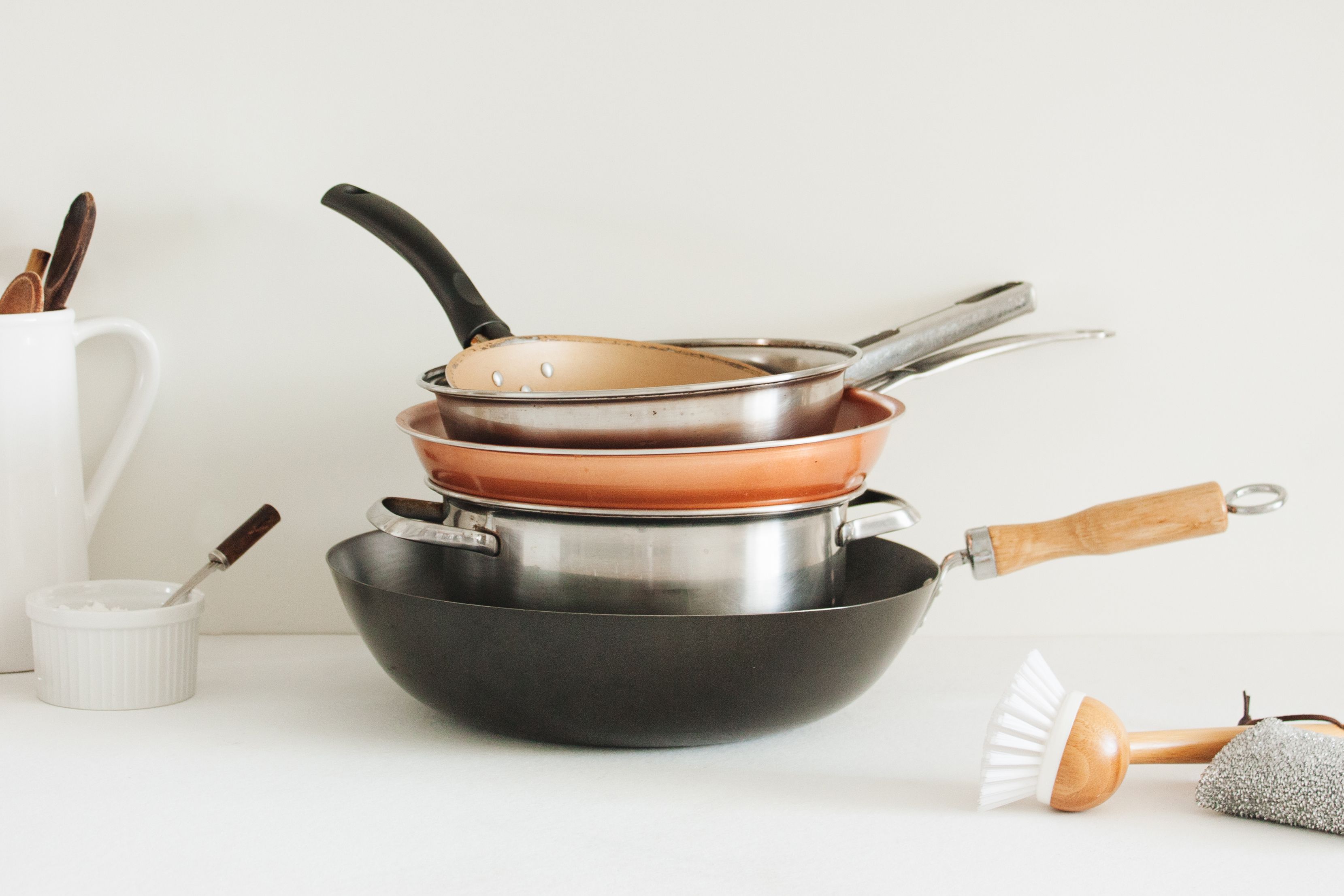 How to Use Baking Soda to Shine Pots, Pans, and Cookie Sheets

Baking soda is an ideal pot scrubber. It's nontoxic, inexpensive, and safe for enamel, cast iron, copper, and nonstick cookware and bakeware.

It would not concern me. It has no effect on the pans ability to cook. Since we buy reasonably inexpensive non stick we just throw away the pans when they get worn out.
I thought the T-Fal my wife got me would not last long. They are almost 3 years old, used most every day and they are still in fine shape.
I did see some in the Costco magazine that I did not recognize and I plan to buy the 3 pan set. 8" 10" and 12" for $30. They look very good.

Many years ago, I used to use a few relatively cheap ptfe pans, mainly for frequent omelettes, and I'm still alive, too! I never had any build up of anything really visible, but I never really cooked anything at higher temps to brown them - I used other pans for that, and most other things that involved caramelizing ingredients, like onions, etc. And I have one smaller, NS wok, that I use for stir-frying, but not at higher temps - just tossing on medium heat - and no build up at all.

However, after a number of years, those skillets would slowly loose their NS abilities, for omelettes and things like crepe batters, no matter what I cleaned them with. Eventually, I'd give them away to someone who wouldn't miss that, and buy a new one. After a couple times, I thought of something that I never had tried to clean this "stuff" off with - OVEN CLEANER! Obviously, this stuff that builds up must be grease (and other food items), and that's what oven cleaner (the old fashioned lye based) removes! I thought of this one of those times I took the top sections of my range outside, to spray down with oven cleaner, and a couple days earlier I had just used one of those pans for something, and had it stick. I thought "Hey, this teflon should be totally inert to anything, so what could this do? And even if it doesn't work, what do I have to loose?" So I took that pan out there, and emptied the rest of the can on it, and I could see some brownish color in the foam, even though it really just looked an even green all over - I guess the build up was sort of an even coating, instead of a spot in the middle. The color lightened considerably - probably back almost to its original color. I hosed it off, and cleaned it some more in the sink, washed it out with vinegar - no foaming, so the lye was gone, and the coating was not coming off at all. Final test - an egg, broken into a hot pan, and it loosened quickly, with no grease; maybe not original release capability, but close to it!
C

Some cookware comes with warranty and guarantees. If I like/need it then I buy. I think the warranty or guarantees are probably worthless.

If you are using cooking spray in your non-stick pans, DON'T DO THAT ANY MORE! The cooking spray will leave a residue that can not be removed. If you must use a lubricant, use butter, margarine, or cooking oil.
You must log in or register to reply here.

Dec 7, 2022
purple.alien.giraffe
P
D
In search of the best chili - so many spices to choose from