The friendliest place on the web for anyone that enjoys cooking.
If you have answers, please help by responding to the unanswered posts.
See posts with no answers
G

There has been some disscussion of Hot spices in food lately. I like spicy, dear spose does not..


So I usualy make our foods realativly mild (heat), though spicy (strong), but not Hot spicy.


Then I add Heat at the table for me... I like whole canned jalapenos on the side, srirachi sauce, but often I find Bottled hot sauces like Tabasco or such have a strong Vinegar flavor that I don't like if un-cooked.


I also make a Hot Salsa that is close to Pico de gailo, for Tacos.


I wonder if Y'all have found any other things?

How about red chili powder you use in a Butter Chicken recipe. You can buy it in an Indian grocery store. Put it in a salt or pepper shaker. Shake on as much as you like at the table.

I also put my red pepper flakes in a pepper grinder so I get a finer powder and a more even spread of heat.

You could mix chopped peppers or hot sauce with something else to make a milder version. Try mixing hot sauce with butter, like you would for Buffalo wings, or with sour cream or plain yogurt and serve the sauce on the side.

I keep a bottle of Tapatio or cholula salsa picante on the table. It doesn't have the vinegar taste that Tabasco does. I also make different sauces my own self. Here is a video of me making my Salsa Picante, Hatch Chile Salsa, and Crema de Pimento Rojo.

Consider trying some chipotle powder. Some heat, some smoke and no vinegar.

Comnoneall ingredients in a sauce pan and bring to a simmer. Stir every 10 minutes and cook for 20 minutes. Remove from heat and place in clea, glass jars. Refrgerate.

This salsa is hot, hotter that any yu sill find in any store, but with outstanding flavor. The heat is tamed by spreading over foods, such as a burger, or mixed in with scrambled eggs. If you want to kick up your soups, or stew, put a tbs of the salsa in it.
I eat the stuff with tortilla chips, but not everyone can do that. Those who have tasted my Raging Bull Salsa have praised it for the flavor. I had one man purchase a pint of $7 dollars, take it home, and share it with his father, both of them watching football and eating tortilla chips and salsa. He stated that he and his father couldn't stop eating it, though they were in pain from the heat. he said it tasted so good that they just couldn't stop themselves, but paid a price. This salsa isn't for everyone. But if you like hot, really spicy hot, give it a try. You won't be disappointed. And like I said, it isn't so hot whn topping a burger, or steak, or chicken.

Chile at the table, reminds me of a time when I wa a 20 year old, in a U.S. Navy chow hall, in Sand Diego, with a fellow sailor, a very cute female brunette who sat accross from me. Of course i was trying to show off how tuff I was. There was a bowls of hot cherry peppers in the middle of the table. I was not used to eating any kind ofo peppers yet. I picked up a whole pepper and popped it into my mouth. My mouth was on fire. The young lady asked me how I could handle eating peppers like that. I replied that it was nothing, as I felt my face turn red, and sweat beaded on my forehead. Oh the thngs we do to impress when we are young and inexperienced.,

giggler I'm another one that is not a fan of those vinegar based hot sauces, despite loving hot foods. I rarely have to add heat at the table, but sometimes, when friends visit that can't can't eat the real hot food, I have some other things, for those who want heat.

One of the simplest things, that I always have in my fridge, is some fish sauce, with a bunch of chopped up thai (or similar) peppers in it - just 1 c fish sauce to 1/2 c finely chopped thai peppers, and after about a week, the fish sauce will be well infused. It can be refilled several times, to keep getting flavor and heat from the peppers. It's not only compatible with Thai, and SE Asian foods but many others - think about the anchovies used in countless other cuisines out there. A friend uses it all the time with Italian food, as his wife does not eat hot. 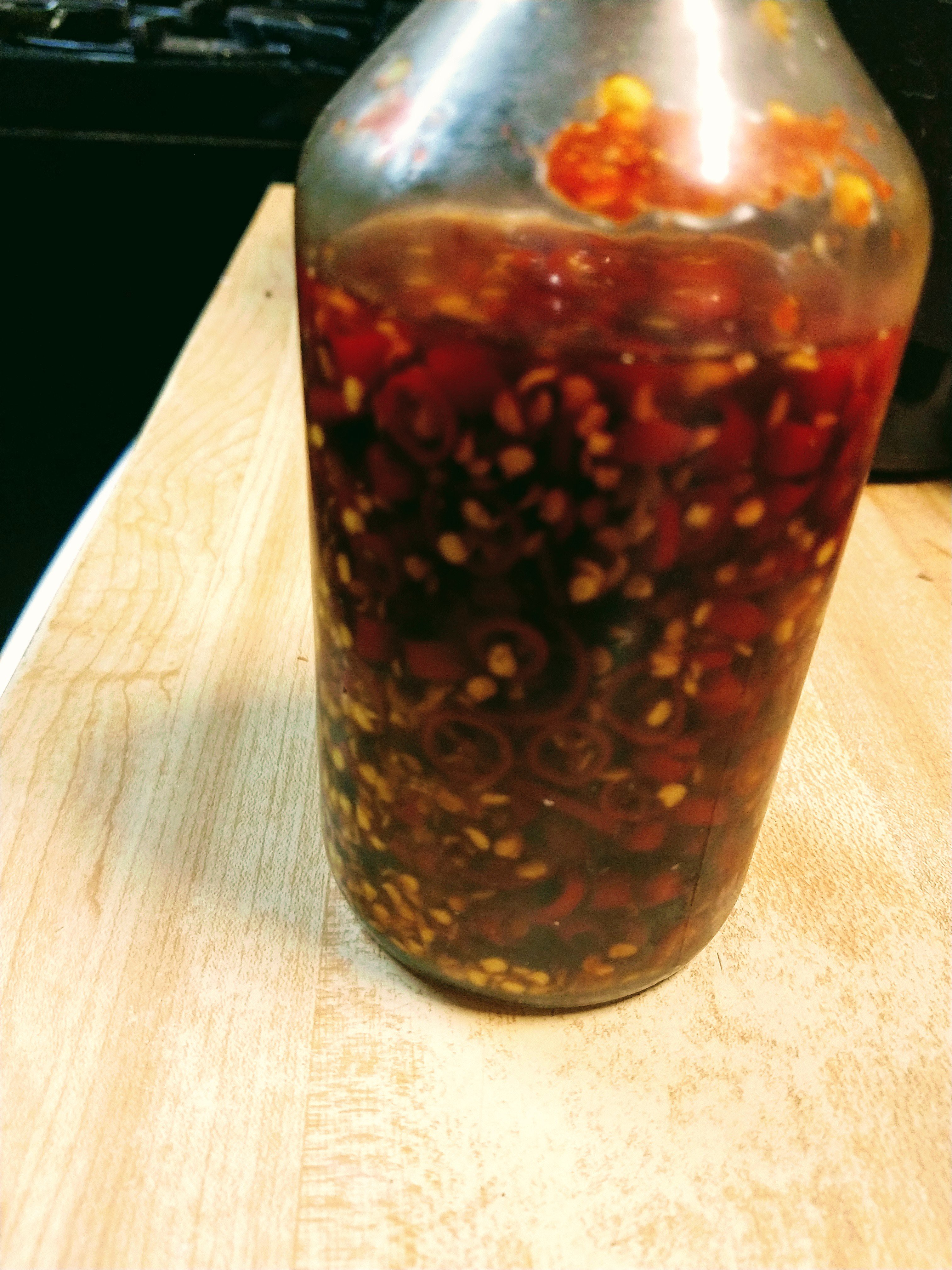 Probably the most useful, and fairly easy thing to make, for adding heat to dishes, is hot oil. I originally made this for Chinese food, but quickly learned that this is a very easy way to add heat, with no flavor, for the most part. Many ways of making this, some using all whole peppers, some using all ground cayenne, most calling for cooking for a period of time - not good, esp. if you don't have a powerful, externally vented range hood. I came up with a better idea, for those who can take it outside. And I use some ground, but mostly crushed peppers. Try to use an oil that doesn't solidify in the fridge, like olive and canola oils do. Some add sesame oil to it, but I don't want sesame oil in most things, so I leave that out.

Heat oil in a 2-3 qt saucepan (on your outside burner, if you have one by your grill) over medium heat, until it reaches about 410°, or when there is a tiny wisp of smoke on the oil.

Take it outside, or off the heat, if outside, then add the chiles - carefully, as this will foam up. Leave quickly (unless you like chile fumes!), and let it cool. This is when I strain it through a coffee filter, though some leave the peppers in there, and shake it up, when using. Store in fridge, unless you use it fast, as the oil will eventually go rancid.

Here is a dip sauce, that I have used with many grilled and fried foods. Keeps forever in the fridge.
http://www.discusscooking.com/forums/f21/thai-sweet-and-spicy-dip-sauce-102241.html

Another one that I always have in the fridge is nam prik pao. Just made another pint of it a couple of days ago. Compatible with many foods, and I often just add it to a stir fried vegetable, for a delicious flavor.
http://www.discusscooking.com/forums/f21/making-nam-prik-pao-a-simplified-version-101511.html

I have a number of others, but these are the ones most compatible with different cuisines, and longest storage times.
Last edited: Nov 17, 2019

You are absolutely correct that fish sauce isn't found only in Asian Cuisine. In France, it's made from fermented anchovy, and is called Sauce De Poisson. In Italy it's Colatura di Alici, another fermented anchovy sauce. I was introduced to Sauce De Poisson when I first got married. DW used it in a dish with cellophane noodles, red pepper flakes, onion, garlic, and bamboo shoots. In the recipe she had obtained, it was Korean, and Thai versions as well.. I tried making a few things by winging it with the Sauce De Poisson, and soon found out that the right amount of this foul smelling sauce really enhanced certain foods, while a drop or two really ruined foods. I'm pretty sure this is true of the Korean and Thai versions as well.

For some odd reason, I don't find Tabasco Brand Pepper sauce vinegary, while Trappy's, and Louisiana hot Sauce scream vinegar to me. Also, Jamaican Hell Fire Sauce, and Sriracha taste great to me, but don't give me much heat. And I like the wood resin aromatics from the aging barrels in Tabasco. I don't use a lot of red or cayenne pepper, as they have very little, if any flavor. I like hot, but I want to taste the peppers, hence the reason I make my Raging Bull Salsa and sauces. For those who want the pepper flavor, with less heat, I make Frisky Calf, and Mild Mama varieties (like my salsa names?

I try to make something for everyone who will be sitting at my table. For me, good guacamole isn't good without garden ripe,freshly minced tomato, a splash of Tabasco, and cilantro, brought together with a light splash of fresh lime juice. For DW, little if any cilantro, no hot sauce, and use lemon juice. We all have different tastes. My goal is to make my food enjoyable to all who sit at my table.

Pepperhead, I think I would like the food at your table. Your recipes look very apealing to me, with great variety. You obviously are skilled in the use of peppers. Thanks for sharing.

@pepperhead212, That Nam Pla Prik, when you use it, do just use the liquid.

I have saved the recipe to CMT.

taxlady said:
@pepperhead212, That Nam Pla Prik, when you use it, do just use the liquid.

I have saved the recipe to CMT.
Click to expand...

Yes, for the most part - a few bits of peppers come through, but mostly just the fish sauce. And after it gets almost to the bottom, just refill it, and let it infuse again.

I cook mostly for myself, so up the heat to what I like.
When cooking for others, I tone it down and put sambal out (home made or bought, which one depends on the meal and what I got in stock)
You must log in or register to reply here.

Dinner Parties At The Old Place